Robert Schulman, C.P. is a Certified Prosthetist who founded the Limb Kind Foundation in 2019 and serves as the organization’s Executive Director.

Robert, a native Long Islander, graduated from SUNY University of Buffalo in June 1994 with a B.A. degree in Sociology. It was after graduation that Robert discovered the field of Prosthetics, and what would turn out to be his life’s passion. He started out as a Prosthetic Technician at Allied Orthopedics in Brooklyn, NY, learning how to build and fabricate prosthetic limbs. Robert then went to prosthetic school at the Newington Certificate Program in Connecticut to accomplish his career goals in becoming a Prosthetist. After graduating Newington Certificate Program in 1997, Robert returned to Allied Orthopedics, and became a Certified Prosthetist. Robert has helped thousands of men, women, and children with limb loss, regain their independence after providing them with prosthetic limbs. 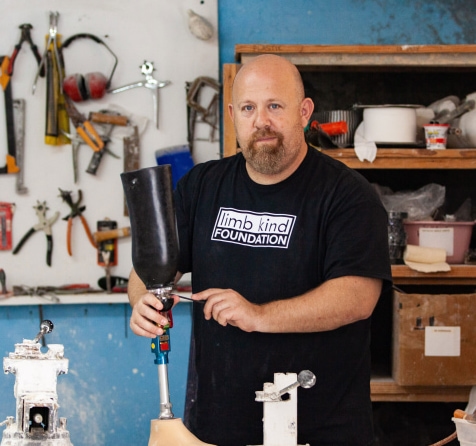 Robert has visited Haiti after the earthquake of 2010 to make children prostheses many times under the auspices of Living Water Childrens Fund.  The desire to make an even bigger impact on the lives of children with limb loss was evident and many people wanted to assist Robert in his mission.  So the newly renamed non-profit organization was formed, the Limb Kind Foundaton.  In 2019, the Limb Kind Foundation was formed and the team was able to visit both Haiti and the Philippines, making many children prostheses. Jopin Robert and the rest of the Limb Kind family spread kindness and make a difference in many children's lives around the world.

Wadad Lahoud graduated from the University of Houston, in 2019, with her BS in Mechanical Engineering. During her undergraduate career, she worked with a nonprofit organization on campus that…

Matilde Simas is a documentary photographer from Boston. Her work focuses heavily on the beauty of the human spirit and aims to show the dignity of every subject. Matilde’s travels ha…

Roberto as been a huge asset to the growth of Limb Kid since inception. Has been on every trip as either a Prosthetist, a Videographer, or both. Helping to create, edit, and publish socia…

Duffy Felmlee, MSPO, CPO, FAAOP is an associate professor for the Prosthetics and Orthotics Program at the University of Hartford. Duffy maintains practice as clinical and educational consul…

Jill Smith graduated from Towson State University, in Towson, MD in 1999 with a Bachelors of Science degree in Occupational Therapy. Jill has worked with all populations over the span…